Predicting the duration of post-concussion symptoms

Predicting the duration of post-concussion symptoms 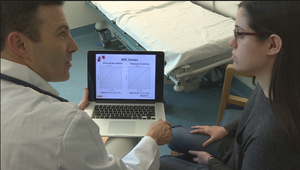 Date: This is not a timed event.

A new study, led by a Children's Hospital of Eastern Ontario researcher and TREKK content advisor Dr. Roger Zemek, has created a validated clinical prediction score that will help health providers and researchers predict the duration of pediatric concussion symptoms. Published in the Journal of the American Medical Association (JAMA), the Predicting and Preventing Post-concussive Problems in Pediatrics (5P) study collected data from more than 3,000 children from nine pediatric emergency departments across Canada at three time points - 7, 14 and 28 days after their head injury.

The data allowed researchers to derive a 12-point score, in which patients with a score of 3 or lower at first visit were deemed low-risk while those with 9 to 12 were classified as likely to suffer from persistent post-concussive symptoms. The score incorporates nine variables found to be most predictive of risk, including age, biological gender, medical history and cognitive complaints.

The hope is that this scoring system will help health providers determine who is a highest risk for persistent symptoms and perhaps help drive research in this field forward.

The Globe and Mail: http://www.theglobeandmail.com/news/national/girls-at-higher-risk-of-suffering-lasting-concussion-symptoms-study/article29073321/