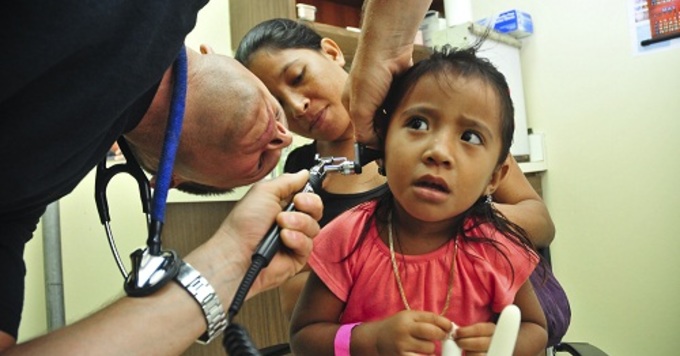 April 27, 2015 – This week's post is also available from the Cochrane Child Health blog.

Acute otitis media (AOM), or middle ear infection, is one of the most common diseases of childhood. AOM presents most frequently in children under the age of two, with 75% of children having at least one episode before one year of age [1,2]. Although AOM is very common, it can be challenging to accurately diagnose – symptoms of AOM often overlap with acute respiratory illness, visualization of the tympanic membrane can be obscured by cerumen, and slight changes in the tympanic membrane can be hard to detect [1].

The Canadian Paediatric Society recommends antibiotics for treatment in all children under the age of six months, and for children who are six months to two years when the diagnosis of AOM is certain [2]. For children older than six months with mild symptoms, the Canadian Paediatric Society recommends a ‘watchful waiting’ approach supported by a topical or oral analgesic [2]. Given the prevalence of AOM in these age groups, antibiotics are being prescribed very frequently. With increasing concern about antibiotic resistance, guidelines need to be created to prevent inappropriate prescription for children who have been misdiagnosed with AOM, and treatments need to be supported by strong evidence to justify their use.

Including six systematic reviews, covering 92 randomized controlled trials with 19,695 participants, a Cochrane overview investigated the available evidence on treatments for AOM in children. Below is the key evidence you need to know when treating a child with AOM.

The authors of the overview concluded:

“The literature to date suggests that antibiotic use in young children with stringently diagnosed AOM appears to be justified, although benefits must be balanced with risk, particularly adverse events and bacterial resistance, and with a role for parental preferences. Improving the accuracy of diagnosis (e.g. training programs for otoscopy and cerumen removal), is thus an important mechanism for reducing inappropriate antibiotic use.”

In 2009, the Canadian Paediatric Society released a position statement with information on treatment and recommendations to guide proper diagnosis of AOM [2].