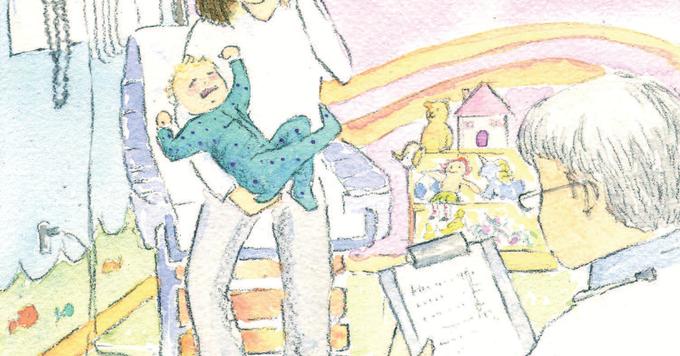 May 4, 2015 - This week's post is also available from the Cochrane Child Health blog.

"Michael's barky cough startled Valerie from her sleep. For the last few nights, Valerie had not slept well as her two-year-old son was fighting a cold and had been up off and on with a fever and cough...She desperately hoped the coughing would stop...More barky coughing roused her from her thoughts. This time the cough frightened her. As she ran into his room, Michael seemed to be fighting for breath."

Michael's barky cough is a hallmark sign of croup. The cough that often occurs in the middle of the night, rousing parents from their sleep, can be an intense and worrisome event for parents and their young children. However, croup is a well-defined condition with a strong evidence base supporting effective therapeutic management.

Croup, or laryngotracheobronchitis, is an illness that affects a child's breathing. It is caused by many different viruses and most often occurs in the cooler fall and winter months. Croup occurs most commonly in children between 6 months and 3 years of age, but can occur in children of all ages. Croup is characterized by a barky cough that can start quite suddenly. Often the child will have a hoarse voice and difficulty breathing. You may hear a high pitched sound when the child breathes in (stridor). Croup is worse at night or when the child is lying flat. The symptoms occur predominately at night with improvement during the day. The barky cough and difficulty breathing usually resolve after a few nights, though occasionally they can last up to a week. Viruses that trigger croup symptoms are picked up from others, and usually spread through coughing, sneezing or contact with the mucous on tissues, toys or hands.

Doctors assess the severity of the child's symptoms by simply watching and listening. If children have an occasional barky cough, but no stridor, they have a mild case. If they have a frequent barky cough and easily heard stridor even while calm, they have a moderate case. If a child’s chest caves in as they breathe, in addition to a frequent barky cough and easily heard stridor, they have a severe case. When the child has severe symptoms they are most commonly very distressed and agitated. In most cases, the illness is mild and lasts a short time; however, in the most severe cases, a small number of children may require hospitalization and intubation [1].

Antibiotics do not work on croup because the infection is caused by a virus. However, there are a number of other treatment strategies. An overview of reviews compiled evidence to determine which treatment strategies were most effective. The overview brought together evidence from four systematic reviews that included 54 studies involving 4,710 children. The authors made the following conclusions:

Dr. David Johnson of the Alberta Children's Hospital Research Institute has developed bottom line recommendations for treating croup in collaboration with Translating Emergency Knowledge for Kids (TREKK). The recommendations and other resources including clinical practice guidelines are available at trekk.ca. Dr. Johnson suggests:

“The vast majority of children with croup will resolve their barky cough and difficulty breathing within a few nights. While this will occur regardless of whether their child is treated or not, treatment with glucocorticoids helps reduce both children’s severity and duration of symptoms, allowing parents to relax and return to their normal daily routine sooner than they would otherwise.”

University of Alberta, Capital Health, Stollery Children's Hospital. (2012). A Late Night Trip to the Emergency Department: Was It The Right Thing To Do? - Moderate Croup [Brochure]. Edmonton, Canada.